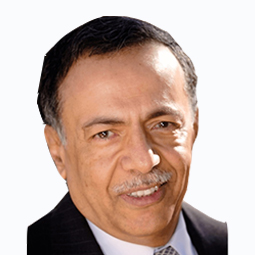 His early schooling took place at the International College in Beirut, Lebanon, where Mr. Al Husain took his High. He also holds a Bachelor of Science degree in Civil Engineering (1978) from the University of Petroleum and Minerals in Dhahran, Saudi Arabia. Mr. Al-Hussain also attended the Pratt Institute in New York City, from which he holds both Bachelor’s (1984) and a Master’s (1986) degrees in Architecture.

After graduating from the Pratt Master’s Program in late 1986, Mr. Al-Hussain returned to Saudi Arabia to work with TAACE, the Tarik Ali Reza Consulting Engineering Company in Riyadh, KSA. During his tenure at TAACE, Mr. Al-Hussain worked directly with the Principal as site architect for the construction of the HRH Prince Saud Al-Faisal Palace. Mr. Al-Hussain was promoted to Office Manager of TAACE and oversaw a wide variety of residential, commercial and mixed-use projects designed, managed and constructed by TAACE through 1990.

In 1991 Mr. Al-Hussain relocated to the U.S. to the Fairfax County area of suburban Washington, D.C. By early 1992 Mr. Al-Hussain formed Pillars and became President of Edgemoore Homes, a single-family homebuilding J.V. that included Mr. Richard Snider. In addition, Mr. Al-Hussain was the co-founder in 1995 of Basheer & Edgemoore, high-end community development, and home building entity.

Following on the successes of both Edgemoore and Basheer & Edgemoore, Mr. Al-Hussain led Pillars Development Group in 2000 to create a high rise / high-density commercial development arm branded as Diamond Properties focusing on close in, urban-centric development and construction sites.

Together, these brand names have compiled over $1.7 Billion of completed residential and commercial real estate development, including the design, construction, marketing, sales, and or rentals of those projects, all areas in which the Pillars brand names were consistently recognized with both regional and national awards for their projects.

Today, the underlying Pillars Development Group is the brand name continuing the award-winning traditions established since 1992, and led by Mr. Al-Hussain into the future with a highly targeted, ultra-specific focus on urban-centric / Metro – served sites in the Washington, D.C. region.